On March 26, 2022, Mr. Ron Wilson was presented the Dr. Kurt J. Wellis Memorial Award.  This award was created to recognize individuals who have served in their community in the sport of amateur wrestling. Ron became a volunteer coach in 2000 when Ambridge and Quigley schools shared the wrestling program.  In 2002, he petitioned to bring wrestling back to Ambridge.  Ron started the Ambridge Wrestling Boosters in 2002 and has been involved ever since. His dedication to the Ambridge Area sports programs impacted his son.  Ron Jr., followed in his father’s footsteps. He was the high school head wrestling coach from 2011 until 2021 and the junior high head coach from 2008 to 2011.  Ron Wilson has also been involved with the Ambridge Football program for 14 years.  It is estimated that Ron has fundraised over 1 million dollars for our district community programs.  The football team attended the SRU football camp yearly due to his endless fundraising efforts. Ron has influenced many students as a mentor, as well as sponsor, to ensure their participation in a sport.   Congratulations Mr. Ron Wilson! 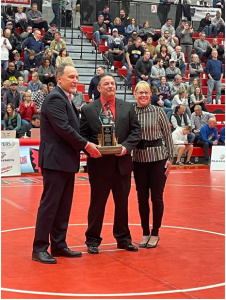