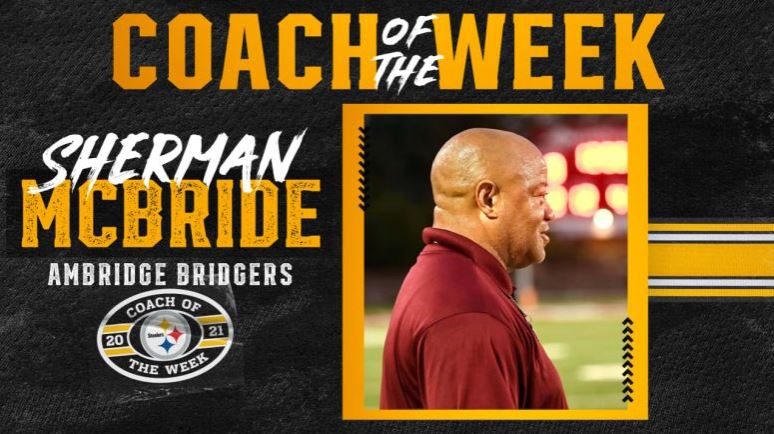 From the Pittsburgh Steelers

Sherman McBride of Ambridge High School is the Pittsburgh Steelers Week 5 Coach of the Week.

“The Bridgers defeated Hopewell 35-9 in a Class 3A Northwestern 6 Conference battle. The victory ends a 28-game losing streak by the Bridgers, and is the first of Coach McBride’s head coaching career after being named head coach earlier this year. He served as an assistant coach for 21 years under former two-time Steelers Coach of the Year winner, Mike Zmijanac.”

During each high school football season, the Pittsburgh Steelers select a High School Coach of the Week. This coach is selected by the Steelers as someone who has a big victory, a turnaround season, does extraordinary work in their community, and/or gives great effort to make a lasting positive impact in his student athletes. The Coach of the Week winners are invited to be honored at a Steelers home game and receive a framed certificate signed by NFL Commissioner Roger Goodell and Head Coach Mike Tomlin; a Steelers Coach of the Week cap; and a $1,000 donation to their football program.